It's All About Light Intensity (Part 2)

The second component of light is intensity. A few burning campfire embers has less light intensity than a heaping pile of burning embers; however the color temperature is still that of burning embers. Likewise, the color temperature of a 60-Watt Incandescent bulb is the same as that of a 150-Watt Incandescent bulb. The 150-Watt lamp will be noticeably brighter, but the color of the light has not changed, only the intensity of the light.

Three variables are used to control light intensity the image sensor sensitivity (the ISO) : the lens aperture, and the shutter speed. Collectively, these make up the “Exposure Triangle.” 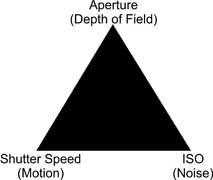 In traditional photography, (film) an ASA value describes how sensitive the film was to light. The higher the ASA, the “faster” the film, or the more sensitive it was to light. Likewise, the lower the ASA, the less sensitive it was to light. So, in addition to choosing the proper color balanced film for you shooting adventure, you also needed to select the right speed. If you were shooting an outdoor sporting event in mid-afternoon, you would need a film capable of stopping action in bright sunlight. If the event is indoors, the light intensity would not only be different, so would the color. This often meant swapping rolls of film or carrying around two or more camera bodies with different films in each: one for outside shooting (Daylight film of ASA between 50 and 200) and one for inside (Tungsten film with an ASA or 200-800) Sound complicated? It was, but all that changed with the development of modern digital photography where a couple of adjustments on the fly sets your camera up for outdoor or indoor shooting at the right “film” speed. Instead of capturing individual frames on a length of film, digital cameras also capture individual image, but store them digitally on a memory card. They also allow the characteristics of those images to be set individually.

ISO stands for “International Standards Organization,” which develops and publishes international standards and is headquartered in Geneva, Switzerland. ISO replaced ASA, “American Standards Association.” Kodak developed ASA in the 1940s as a scale for film speed. The higher the ASA rating, the “faster” the film could capture an image.

ISO settings also affect the quality of the final image. Microscopic crystals and dye layers were used to capture images on color film. Slower film had smaller crystals (grains). Faster film had larger grains, but they worked better in low-light conditions. The grain difference became noticeable as you made larger prints from the negatives. The key to success was choosing the right speed film for the type of photography.

In digital cameras, “noise” is the digital grain. Images shot at lower the ISO settings exhibit less noise. Higher ISOs are noisier. Like film, high ISOs are often used in low-light conditions, or to capture moving objects. An example is an indoor sporting event when you want to freeze the action of a basketball player the moment he/she releases the ball. Higher ISOs are also necessary for shooting subjects such as campfires, or the beach just after sunset. Keep in mind that the higher the ISO you choose the noisier shots you will get. With digital cameras, you get immediate feedback as you experiment with camera settings, something that was not possible when shooting film.

You can see the noise when you enlarge an image. It shows up throughout the image; although, it is more pronounced in the darker regions. The challenge is to select the right ISO that minimizes noise while offering the best opportunity to capture the image. Since the ISO can be adjusted for every image, this is far easier to do than change rolls of film.

The following images illustrate ISO noise. The image on the left was shot using existing light. The highest ISO setting combined with a slower shutter speed captured the image without using a flash. The aperture was set wide open. The image on the right had a higher ISO setting in order to capture the energy flashes as my hand touched the glass orb. The image to the left has more pronounced noise than the image to the right. Adjusting the ISO and shutter speed made both possible.

Aperture refers to the diameter of the lens diaphragm (iris). The diaphragm is a series of “leaves” placed inside the lens. The Aperture has two functions; control the amount of light entering the camera and control the depth of field in the image.

Depth of Field, or the amount of image area on the sensor that is in focus, is the product of “Circles of Confusion.” (Yes, that’s what they are really called.) Think about when you were a kid and used a magnifying glass to focus the sun on a spot on the ground. When you were in focus, the sun was reduced to a small circle. Now, think of your camera lens. When you focus the lens, you are creating a small dot on the image sensor; however, unlike moving the magnifying glass, the aperture setting controls the dot size. To make it even more confusing, there is an infinite number of dots striking the image sensor for each image. These dots cross each other. The larger the aperture setting, the larger the dots and the more they cross. The smaller the aperture setting, the smaller the dots and the less they cross. Photographers use this to control how much of the image is in sharp focus…all of it, or only part of it. By combining in focus and out-of-focus portions of the image area, photographers can focus the viewer on their subject.

The focus was on the poppy in the left image, with a relatively large aperture opening to throw the background out-of-focus. If the background was in sharp focus like the poppy, the flower’s impact would have been lost. In the right image, the aperture was set so that the entire image was in focus. The contrast between the feather and the sand and the desire to ensure the entire feather was in sharp focus meant using a smaller aperture opening.

While ISO sets the sensitivity of the image sensor and the aperture controls both the amount of light entering the camera and the sharpness of the image, shutter speed controls the duration of the light on the sensor itself, or the exposure.

The shutter is located in the camera body between the image sensor and the lens. There are two types a copal square (vertical) and a focal plane (horizontal). They both use two components to the shutter and both operate the same. The first component opens the shutter and the second closes. Think of it an open window traveling across the image sensor. That opening is referred to as “shutter speed.”

A number of cameras do not use a focal plane or copal square shutter. However, the function of the shutter is the same, control the duration of the light striking the image sensor.

Most cameras have a built-in shutter speed range from 30 seconds to 1/4000 of a second. Higher end cameras have a broader range. Some cameras have provisions for attaching an external shutter release allowing you to shoot extremely long exposures.

Determining the correct ISO/aperture/shutter speed combination for the image you want to take often takes a little experimentation. The wonderful thing about digital cameras is you get immediate feedback. So, go out and experiment. The more you learn how to use your camera controls, the better your images and the more fun you will have with photography.